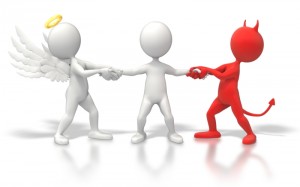 Have you ever considered what habits you’d like to change?  There are the typical ones, of course, related to smoking, drinking, exercise, eating, etc.  But what about the more subtle habits that you aren’t totally aware of?  For instance, if you could change two habits that would help you be more successful in your business, what would they be?  Maybe you would like to start the day earlier, read or learn something new, limit your interruptions, be home in time for dinner?  Instead of just thinking about what you want, consider what habits you have formed that need to be replaced.

If your goal is to start your day earlier, what habit needs to be replaced?  It would sound simple to just resolve to get up earlier. However, maybe your habit is to go to bed so late that you are overly tired in the morning. Despite your best intentions to get up an hour earlier you instead hit the snooze button six times!  So what you really need to change is your bedtime habit – before you can change your wake-up habit.

Let’s take that a step further.  Is the habit simply about when you go to bed?  Maybe it’s more about when you put your phone away.  You need at least a couple of hours to decompress from work.  But your habit is to check messages consistently throughout the evening because you think this is saving time.  By the time you finally put your work away, it’s ten at night.  Then you need to unwind, so you don’t actually fall asleep until midnight.  You can see here that one habit is never really just one habit.  It’s an interwoven play of behaviors with a domino effect.  If you really want to get up earlier, then you could make it your habit to ignore work emails after dinner.  Then you would have time to unwind and will sleep better.  It would certainly be a whole lot easier to get up in the morning if you’ve had a good night’s rest.  The funny thing is, as an aside, that answering your emails at night is very unproductive.  You’ll find that responding to emails takes much less time if you write them in the morning when you are more refreshed and energetic.

So take a minute and identify three habits you want to swap.  Make sure that you don’t stop at the obvious answer to change the habit, but spend a couple minutes looking for the first domino that impacts everything else.

Three indicators that you are a strategic thinker

Wish you could clone yourself?

Three signs you are a show-off