When is the last time you felt proud of yourself? This is a slippery slope! When I was in my early twenties, I remember telling a friend that I was 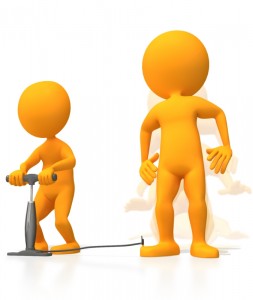 Pride before the fall

proud of myself. I don’t recall the exact details of the event that led to that feeling, I just know it was a pivotal time in my life and I had recently made some major life changes. In roughly the same week, I heard a priest give a sermon on “pride before a fall.” The commentary discussed the ego and illusion of this state, which he explained was typically followed by a hard fall – the feeling that all was well in the world, and then the rug was ripped out from under you.

So is it bad to feel pride? Pride is considered by many to be the first and worst of the seven deadly sins (pride, lust, envy, gluttony, greed, sloth, and anger). It is defined as a form of arrogance, vanity, and a sense of over-importance. This narcissistic view of oneself often excludes other important people and figures, including God, which can lead to destruction and ultimately one’s own demise.

So every time I hear someone say they are proud of themselves, or I catch myself saying I am proud of something I’ve done, I initially think “pride before a fall.”

I am cautious not to cross the line into narcissism, although I’m not exactly sure where it is. I am by no means suggesting that you shouldn’t be proud of yourself for certain accomplishments. You may have run a marathon, completed a project, lost a significant amount of weight, or hit some other milestone. I say revel in the glory of the moment and give yourself credit for your work and dedication to what you’ve achieved. This is a positive aspect of authentic pride. But temper this feeling with a sense of gratefulness and give credit to those who also supported you. The minute you think you did it all alone and you’ve got it all figured out, the next minute you may fall.

4 Actions That Target Your Personal Growth

How do you deal with a passive-aggressive person?